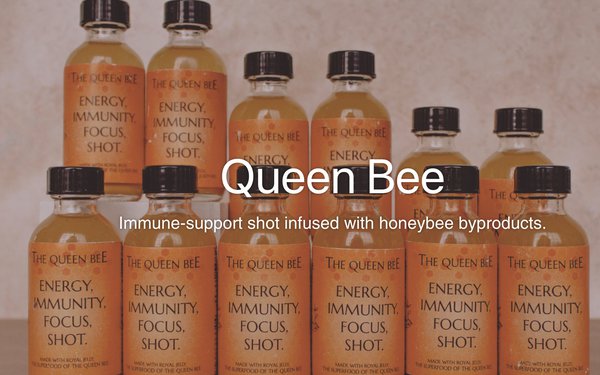 There’s more than one way to save honeybees.

Raina Jain has come up with two so far — and she’s still in college.

While in high school, the Connecticut native became aware of how critters called Varroa mites were decimating the world’s bee population. So she created a device that deposits small amounts of the naturally occurring, mite-killing pesticide thymol on bees as they enter and exit hives.

When the onset of COVID-19 disrupted the development of her company, HiveGuard, Jain pivoted to the CPG space with a company she dubbed Queen Bee.

For each bottle of Queen Bee sold, the company donates money to plant “pollinator” trees and thus support the bee community — which also faces threats from wildfires and other forms of deforestation.

Earlier this year, Jain was awarded $15,000 from the University of Connecticut’s School of Business Innovation Quest competition.

In this interview, which is edited for brevity and clarity, Jain explains why very few bees become queens and details her company’s journey from hives to Whole Foods Market.

CPG FYI: How did you first learn about the plight of honeybees?

Jain: In my junior year of high school I joined a science program. We basically went to a bee farm and saw thousands of dead bees. So I began working on a device to eliminate Varroa mite infestations. Unfortunately, when COVID hit, the business kind of shut down.

That’s when I had this realization -- why should it just be beekeepers who have the power to save bees? It should be regular people like you and I who can also have an impact.

CPG FYI: How did you get into functional beverages?

Jain: When I was a kid, my mom always made this kind of elixir shot. It was ginger and turmeric and we used to drink it every day for overall health benefits.

We had a beehive in our backyard for testing with the device I was working on. I used to take raw honey straight from the hive and mix it with the ginger elixir. When my beehive died I went to local farmers' markets and supermarkets to find similar products — basically ginger shots.

That posed this question to me: why do good-for-you products have to taste so bad?

Jain: All bees are born the same, but one bee egg is fed royal jelly. It’s quite difficult to source because it’s so scarce and the bees produce so little of it. That one bee ultimately becomes a queen and is four to five times larger, can live 20 to 25 times longer than the rest of the bees, and can lay over 2,000 eggs a day solely because it was fed royal jelly.

CPG FYI: How did you get Queen Bee into Whole Foods?

Jain: I had a box of ginger turmeric shots that I drove around to Whole Foods stores and asked the managers if they would put them on their shelves. Then one person said “you need to call buyers.” And I was like, what’s buyers? So I started emailing every buyer who I thought would be interested. After a lot of persistence, there was this one amazing person who saw the potential of the product and me.

CPG FYI: Do you have plans for other product launches?

Jain: I’ll be expanding the shot line with other flavors. I’m also working on powders with honeybee byproducts. Think of them as Pixy Sticks, but good for you. We’re formulating those products right now for energy, sleep and stress. You just put the powder in your mouth and it dissolves.

CPG FYI: What advice would you give CPG entrepreneurs?

Jain: As much as people invest in your product, they’re also investing in you. I think the thing that really sold people was not only the product, but the story behind it.

Storytelling is such a powerful narrative. If you’re able to implement it into your product, your brand and the way you speak and communicate, it makes you that much more noticeable and stronger. People resonate with people. They don’t resonate with things.

Subscribe to get special offers, free giveaways, and once-in-a-lifetime deals.